What Does it Mean to Listen? 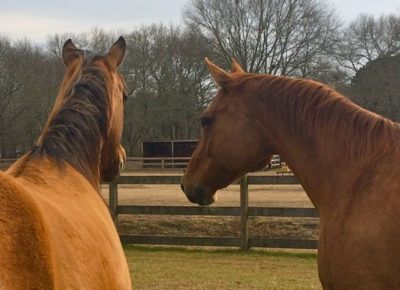 Puck and Tempo having a conversation in “horse language”.

If someone were to ask my horses the question, “What does it mean to listen?”, I’m pretty sure they would say: “Everything. It means everything.”

Although horses have the ability to vocalize, their primary modes of communication are behavior, body language, touch and energy. We humans, on the other hand, tend to rely almost exclusively on spoken and written language to communicate. Because horses cannot speak or interpret our complex spoken languages, those of us who want to train and/or ride horses must learn to use body language, touch and energy to communicate with them.

I’ve heard some experts on leadership suggest that the art of learning to read and interpret body language is one of the key determining factors that separate “great leaders” from the rest of us. In fact, author Linda Kohanov wrote a book entitled The Power of the Herd in which she explains that many of the world’s greatest leaders were also accomplished horsemen. Coincidence? Perhaps not.

Generally speaking, when a person (or a horse!) feels un-listened to, he/she will do one of two things: start speaking more loudly (i.e. “maybe if I YELL he/she will finally hear me?”) or shut down emotionally (i.e. “what’s the use?!”). Sadly, I’ve seen many horses in both of these camps. 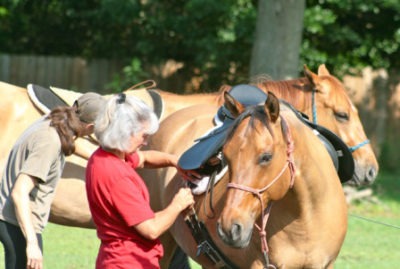 Through their facial expressions we can see that one horse is happy with the way being saddled feels and the other is indicating displeasure.

How does a horse yell, you might ask? Well, the same way it communicates: through behavior, body language and energy. Only exaggerated. So, for example, a horse that doesn’t like the way a saddle fits might initially communicate this by pinning its ears or getting fidgety when you tighten the girth. But if the human doesn’t listen (and/or respond with an understanding heart), the horse might try to communicate more loudly the next time by kicking or biting when the human tightens the girth. If the human still doesn’t listen and proceeds to “mount up” (most likely exacerbating the discomfort of the saddle due to the human’s weight now being added), the horse might bolt or start bucking. This behavior from the horse is the equivalent of a human yelling, “YOU AREN’T LISTENING!” 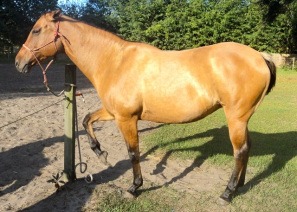 Puck exhibiting behaviors to let me know she’s unhappy about being restrained in this moment.

Sadly, such behavior often gets a horse labeled as “bad” or as “having vices”. In many instances, more severe equipment (or even punishment) is then used to try to dissuade the horse from exhibiting the bad behavior (i.e. from yelling at us). It’s this series of decisions by humans, at critical moments when a horse tries to communicate with us, that lead many horses to shut down and just do their best to endure. Such horses may appear very compliant, and sometimes even get praised for being “bomb proof”… but if you look in their eyes and at the lack of animation in their faces you can see that their spirits are actually broken.

So, how do we master the skill of listening to our horses? It’s as simple as understanding that every move a horse makes is communicating something important. And that listening (or not listening) is a choice we make in every moment we’re with them. 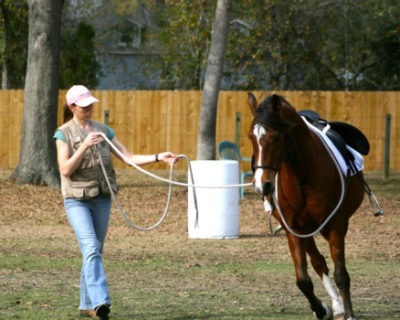 Shoki’s right ear here is politely telling me he “hears” that my focus and energy are talking to his inside hind leg.

A simple turn of an ear can tell us that our horse’s attention and mind is momentarily focused in that direction. If we want, we can choose to “see/hear” this piece of information and then to respond accordingly. If the ear is being turned toward us in response to a cue we’ve communicated, the behavior may simply be the horse’s way of saying, “I hear you.” If we pay attention to this communication, then if/when the horse fails to respond to the cue we at least know it isn’t because the horse didn’t “hear” us. In other words, we don’t need to give the cue louder or stronger, and we certainly don’t need to punish the horse for “ignoring” us. Instead we need to try and figure out why the horse didn’t (or couldn’t) respond. For example, does he/she understand what the cue means? Is it painful for him/her to do what we’re asking? Have we developed the muscles or balance the horse needs to perform the task? Is the horse afraid? 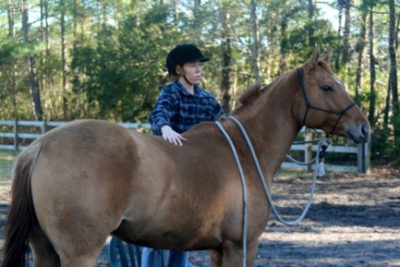 Tempo’s eyes, ears and tense neck are all telling me she’s concerned about something in the distance. By pausing and looking where she’s looking I’m letting her know that I “hear” her concern and take it seriously.

On the other hand, if the horse’s ear is being turned away from us and/or toward a sight or sound in the distance, it may be the horse’s way of saying, “Do you see that? Is it a predator I/we should be worried about?” In this instance we have the choice of reassuring our horse, “Yes, I do see that and it’s nothing to be worried about” or of saying “No, I don’t see it, but your sight and hearing are way better than mine! Thanks for letting me know something is there. The good news is, I don’t think it’s anything to worry about.” But, if we fail to even acknowledge the horse’s question then the horse (especially if it is young or inexperienced) might become pre-occupied with the scary thing in the distance and feel the need to go into self-preservation mode or be unable to focus on the task at hand. Again, if we don’t take the time to listen and acknowledge the horse’s feelings and provide reassurance, the behavior (i.e. their communication) is more likely to escalate. 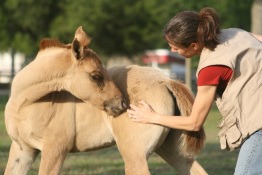 Baby Tempo showing me where she had an itch. 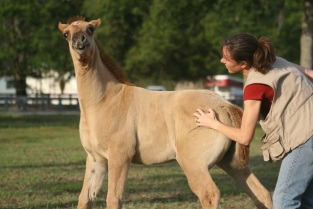 And then showing her appreciation when I scratched it!

Another example is a simple twitch of the skin. This might tell us that our horse has an itchy spot or that an insect has landed on his/her skin. If the horse is tied or otherwise restrained and unable to scratch the itch or swat the insect away, we then have the choice of acknowledging the horse’s discomfort and doing something about it (such as scratching the itchy spot, applying fly spray or swatting the insect ourselves) or ignoring it (not listening). If we ignore it, the horse may get frustrated and start acting fidgety. If the horse’s discomfort became extreme it might eventually try to escape its restraint.

These are just a few simple examples of what it means to listen to our horses with our hearts. It means acknowledging the language they speak as well as their right to speak it – and to be listened to. Learning to observe and interpret (which often means using context to piece things together!) the body language of horses can help build our awareness of the fact that humans communicate via body language as well. And, learning to “see” and interpret human body language can vastly improve our ability to understand the dynamics in any relationship.

“One of the most sincere forms of respect is actually listening to what another has to say.” –Bryant H. McGill

Kim Hallin is an accomplished horse trainer specializing in humane methods that uphold the integrity of the horse. She loves to nurture the powerful bonds that can develop between people and animals. Kim recently launched Unbridled LLC, a business that brings humans and horses together in a collaborative learning process designed to enhance leadership and communication skills while developing greater overall self-awareness. To learn more about Kim, please go to https://www.unbridled.guru.