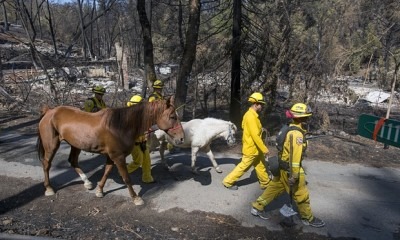 This story begins in the spring of 2015. Sonoma Equine Rescue, Rehab & Adoption (SERRA), located in Petaluma, California, hosted a “Rehoming 4 Life” workshop, sponsored by the Parelli Foundation and taught by 3* Licensed Parelli Professional Erin Fowle. The goal of the workshop was to give SERRA and other rescues in the area additional skills in physically rescuing horses and to expand their knowledge in horse development, thereby ensuring permanent, successful rehoming. The seminar also provided the opportunity for local rescues to meet face-to-face and network with each other – something that would prove to be invaluable later in the year!

“Bringing together local rescues (and some from afar) offered such deep insights and perspectives into the triumphs and minefields that we all encounter as we forge ahead into the challenging world of horse welfare. Our local sister rescues now regularly exchange information on potential adopters, share horse inventories for adoptions to find the right homes, and teach adopters natural horsemanship. Our success rate has skyrocketed! And the horses are doing better and so are their humans!” ~ Laura Ponter, Co-Director SERRA 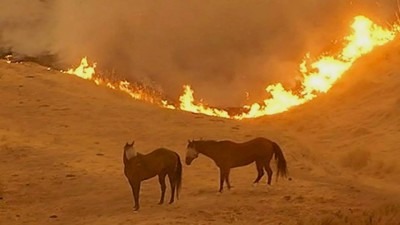 Fast-forward a few months: on September 12, 2015 at 1 pm in the afternoon, a small blaze began what would soon morph into the third largest wildfire in California history. Originating in a tool shed southwest of Cobb (Lake County, Calif.), just 100 miles north of San Francisco, the fires soon swallowed over 76,000 acres, ravaging more than 1,300 homes and businesses and taking four human lives. The large valley’s landscape, coupled with extremely high winds and dry conditions due to a seven-year drought, created a very large wild fire traveling at great speed.

By the morning of September 13, evacuation orders had been issued for more than 10,000 residents in 11 communities. Many residents had only enough time to escape with their families and small pets, with no time to transport their livestock and horses to safety.

In the heart of the fire’s path, the Middletown Animal Hospital (owned by Dr. Jeff Smith) was one of two buildings in town spared by the flames. It became the hub for rescued and found animals to be brought for food, water, and treatment. After the threat of fire had passed, it also became the base for which to reunite animals with their owners. Two local horse rescues stepped up to provide assistance and support to the Animal Hospital in caring for the larger animals rescued from the fires – SERRA and its sister rescue, Sunrise Horse Rescue & Sanctuary, located in St. Helena, both of which had attended the “Rehoming 4 Life” workshop!

As Sunrise Rescue was closest to the disaster site, it was immediately able to respond to horses in need. SERRA then stepped in as a support service for the rescues closer to the fire zone. Each day they communicated via phone or email, and SERRA acquired a listing of supplies needed. The rescue then sourced, collected, and arranged transport for the items to Middletown: an astounding 5,000 gallons of water, truckloads of hay, halters, lead ropes, buckets, medical bandages, and other supplies, as well as organizing local volunteers and other skilled help. Through amazing teamwork, the animal hospital, rescues, and volunteers together helped rescue, treat, and care for over 300 animals involved in the Valley Fires.

The story doesn’t end there. Tom and Julie Atwood, owners of Atwood Ranch, spearheaded an annual fundraiser in support of the HALTER project (Horse and Livestock Team Emergency Response) to provide rural communities in Sonoma and Lake Counties with information and resources for horse and livestock emergencies, as well as creating large animal emergency response teams by providing scholarships for training first responders.

The Parelli Foundation is proud to have provided support to the rescues and those involved in saving horses during the catastrophic Valley Fires. Through communication, cooperation, and teamwork, the people and organizations paved the way for more animal lives to be saved in future emergencies.