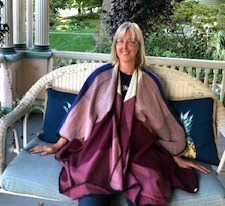 Copy editing and writing for the Parelli Foundation is a respite from my bread-and-butter work on medical textbooks and journals. Although it’s rewarding to help doctors publish their findings, it’s not as fun as reading about horses and the people who love them. 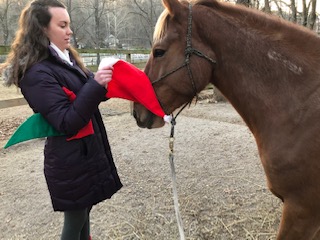 Also fun is studying Parelli Natural Horsemanship in midlife after a childhood of hacking around the family cattle farm on my Shetland pony and Appaloosa. My parents graciously provided Western and English riding lessons, but Pat Parelli’s first clinics were far from my hometown of St. Joseph, Mo., when I was in high school. By the time those clinics went national, I was studying journalism and jumping horses off campus at a stable in Omaha. I interned at Equus magazine in Maryland and reported for The Chronicle of the Horse magazine in Virginia. Next came editing in New York City, marriage, and a career move to St. Louis. While raising two daughters, I freelanced for Horseplay, The American Connemara, and Equine Images and started The Lucky Horseshoes 4-H club to keep in touch with my passion. In 2012, while our stable was only halfway built, my husband brought home the movie War Horse, which triggered me to go horse shopping immediately. 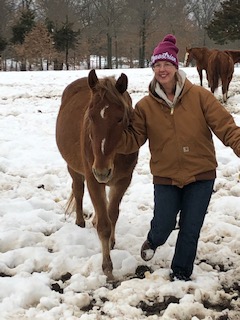 Several years later, our darling senior gelding was diagnosed with liver disease. Heartsick about his demise, I also had to line up a new buddy for our mare. Because the local rescue ranch had no suitable choices then, I committed to be part of the solution to a problem—thousands of horses and burros taken off rangeland by the U.S. Bureau of Land Management.

The Legendary Mustang Sanctuary in nearby Illinois answered no, they didn’t have a burro for us while we looked for another pleasure riding horse. “Tell me about that horse on your website,” I said on a whim. They said he’d been captured in Wyoming at 9 months old and transferred from one holding facility to another. Kathy and Shawn Lewis saved him, as well as many other “three-strikes” mustangs, to heal their spirits. On my second visit to observe his training, I saw this 5-year-old they called “Frank” rear and strike in a round pen with Shawn, whose front teeth had been knocked out by another mustang. I told Kathy nervously, “I’m having second thoughts.” She looked crushed, so I added, “But I know it won’t always be this way.” 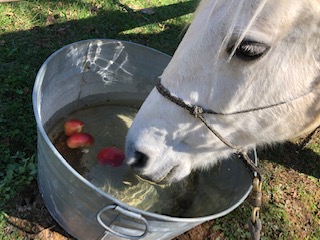 Joan and Color Me Classy bobbing for apples

I went twice more to bond with the sorrel gelding, which my daughter Marie renamed “Copper” once I signed the adoption papers. He was playful and naughty (as Linda Parelli would say). I was going to have to gain more skills. When a corporate client sent me two training manuals to edit, both on the topic of leadership, I took it as a sign that I should rise to the challenge with Copper.

Shawn spoke highly of Pat from their “Road to the Horse” competition days. He advised me to go home and watch the Parelli DVDs I had on loan from my brother. “Watch each one three times,” Shawn said. With these videos dominating our TV for months, my family memorized the theme music and enjoyed Pat’s sense of humor as he demonstrated the horsemanship skills we all needed. And so it began, earning Copper’s trust at our home just before our other gelding was laid to rest in the pasture. Things like handling Copper’s sensitive ears and tacking up took little time, but consistently lifting his right hind hoof long enough to pick took me 15 months … the longest friendly game ever? 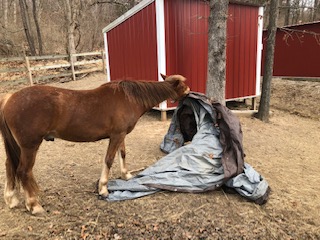 Joan and the tarp

I joined the Savvy Club in August 2017 but didn’t have a licensed Parelli Professional nearby. The Lewises came twice to help, and then I was on my own in a round pen the rest of the year. In my enthusiasm to play the circling game on a 22-foot line in my neighbor’s yard, I misread Copper. He reached a threshold that I didn’t interrupt before it became a dominance game. He bolted, wiped out on our asphalt driveway, and slid into the fence. Thankfully, Copper scrambled up and we reunited back at the stable to calm our nerves. After more groundwork, I tried the figure-eight pattern in the pasture. I must have pressured him because he left dramatically; he jumped in and out of the water trough and over our 5-foot fence. This athleticism scared me, and I felt guilty. Later I took comfort in Pat’s saying: “Horses don’t forget, but they often forgive.”

A fellow horsewoman told me I needed to be at the “Parelli barn” southwest of St. Louis. Stable manager Kim Michelson, despite a recent car accident, calmly and confidently arrived to assess the 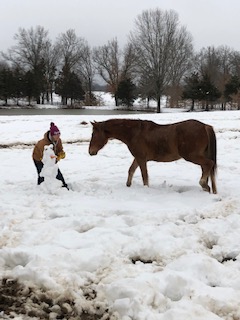 situation and see how our horses trailer loaded. While practicing with Copper, we joked about Pat’s notion that it never takes “longer than 2 days.” As a Savvy Club gold-level member, longtime regular at Savvy Summits, and Parelli student who earned two stars, she soon had both horses loading confidently. Those of us who board with her benefit from her immense knowledge and humor when she tells it like it is about what our horses are thinking. 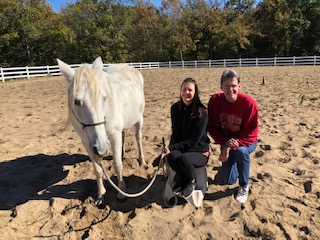 After Kim pegged Copper as a left-brain-introvert-cusp-extrovert, she said we would work on me. I traded my round pen for lessons, and then Kim gave me lessons for my birthday, including tune-ups riding my mare. “Color Me Classy” is a left-brain extrovert with a spirit level upwards of 9, said Kim, and she expects Copper to be the easier of the two to ride. This year I’m ponying up for more lessons to keep it positive, progressive, and natural with both mounts and to submit audition tapes.