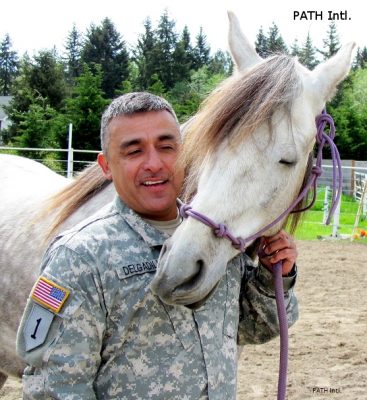 After funding for equine-assisted counseling ran dry for veterans at S.T.E.P.S. with Horses in Texas, a $2,500 grant from the Parelli Foundation drew them back in July 2019. Licensed professional counselors (or supervised graduate-level interns) and Professional Association of Therapeutic Horsemanship International (PATH Intl.)-certified equine specialists in mental health and learning have since held 18 sessions for four clients.

Just as Parelli Natural Horsemanship focuses on relationships between humans and horses, S.T.E.P.S. emphasizes the importance of the relationship between a client and horse, values the horse’s role as a sentient being, and allows a horse to be self-directed in interacting with a client.

Among the counselors are the S.T.E.P.S. co-founders. Hallie Sheade, Ph.D., is a licensed professional counselor, author, registered play therapist, and national certified counselor. Paul Ziehe is a Marine who supported Operation Iraqi Freedom in 2003 and 2004 and later became a PATH International riding instructor. The pair collaborated in 2017 to fill a gap in the mental health field that wasn’t well served, they believed, particularly for veterans and at-risk youth who don’t respond to or avoid traditional office-based therapy. 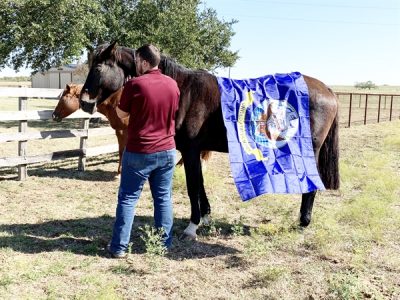 One such veteran is “Jacob” (not his real name), a Marine who served in Afghanistan and the Middle East. He came to S.T.E.P.S. to ease his depression and posttraumatic stress disorder from multiple deployments to war zones. Jacob struggled for years and even attempted suicide.

Hallie explained: “He knew he needed to get better but didn’t know how. During Jacob’s first session, he bonded with a horse named Riley. Jacob approached Riley but felt his thoughts begin to race and stepped back. Jacob stated that he felt scared that Riley would reject him. Upon expressing his feelings, Riley stepped toward Jacob and immediately began to nuzzle him. As Jacob and Riley’s relationship progressed, he began to try new activities with her. Every time Jacob’s mind would start to drift, he would notice Riley becoming distracted, too. In order to keep Riley focused, Jacob learned to stay present and focused, too. Eventually, Jacob began using the skills he learned with Riley to keep himself grounded outside of his sessions and felt like he was becoming himself again.” 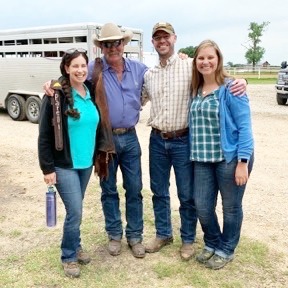 “Janet” served in the Navy during the Vietnam War. Recently, a friend suggested she try equine-assisted therapy. Hallie said: “Janet had experienced numerous traumatic events throughout her life. She struggled to complete daily activities and spend time with loved ones. During her first session with Zia, Janet recalled positive memories about a horse she had owned as a child. She said that being among the horses gave her a sense of peace she could not find elsewhere. Janet reported avoidance of people and public places due to feeling unsafe. She reported feeling too hypervigilant and ‘on guard’ to enjoy herself. Over time, Janet began to process these feelings while stroking Zia. She noted Zia’s responses to her and felt comforted.” Janet also reported that she would imagine Zia when she felt scared and was better able to manage her fears, enabling her to begin spending more time with her family and being in public.

S.T.E.P.S. serves clients at YMCA Camp Carter in River Oaks and The Ranch at Windy Point in Cresson. The Ranch is owned by Lauren Massey’s family. Lauren is a Parelli Level 3 student. 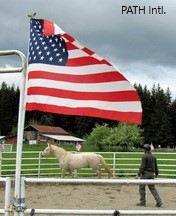 Hallie said: “Prior to partnering with The Ranch at Windy Point, I had only very basic knowledge of Parelli Natural Horsemanship. As our partnership has grown, I’ve learned more and more about Parelli and found the philosophy to be a good fit with my equine-assisted counseling philosophy. Through my discussions with Lauren, she felt that our counseling approach (called Relational Equine-Partnered Counseling) is a natural fit with the Parelli philosophy based on the emphasis on the human-horse relationship and sessions taking place in the pasture, where the equines can be self-directed and provide organic feedback to the clients. Given that, Lauren encouraged us to apply for the grant. Learning more about Parelli has definitely helped me in better understanding the horses’ contributions and reactions during the sessions and, in turn, helping the clients in reaching their goals as well.”

For more information about S.T.E.P.S., which stands for Spectrum of Therapeutic Equine-Partnered Services, visit https://www.stepswithhorses.org/. To learn about Equine Connection Counseling, visit https://www.equineconnectioncounseling.com/eccs-models.html. 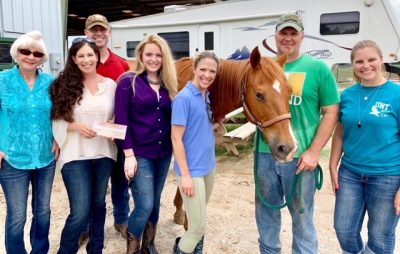