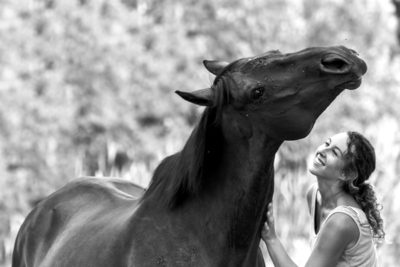 Like many Thoroughbreds, Indigo tried his best at the track but was dismissed as “too slow.” He went to a rescue organization north of Paris, Cheval Avenir, with so much life left to live. Tifaine Regnier of Metz, France adopted the colt for one simple reason: She needed a horse in her life. Because of back pain after a jumping accident, her focus was on groundwork and studying something she’d heard about, the Parelli Natural Horsemanship (PNH) Seven Games.

“No one around me knew about PNH methods, so I checked on the Internet. I learned about the concept and games,” said Regnier. “Indigo needed a real relationship; he needed to trust, and so did I. Unfortunately, PNH wasn’t really known in France.”

While getting acquainted with her companion, several issues surfaced. “When I saw Indigo for the first time, he seemed a little shy and was really skinny,” Regnier said. On closer inspection, she saw a nose deformity. “It turned out that it had been surgically opened when he was a foal to allow him to bring more air into his lungs for racing. Then, watching him in the 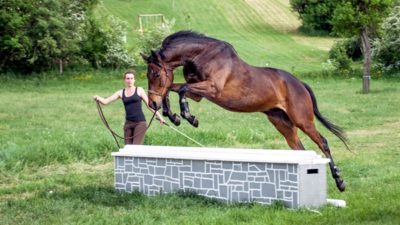 fields the first days, I noticed that he wasn’t able to canter or gallop. And if he laid down, it was extremely difficult for him to get up again.”

An osteopathic veterinarian determined that the gelding had suffered at least three fractures—on the forehead, sternum, and tail. “I still don’t know what happened to him before he came home with me,” Regnier said. “I tried to call the former owner, but he hung up on me… and now I just don’t want to know anymore.”

With unconditional love and empathy for her horse, Regnier realized this: “We were the same—he couldn’t be ridden, and I couldn’t ride, so we were perfect together!”

Gaining weight and confidence took about 3 years. “When I walked into his stall the first few times, he was completely scared and dangerous, trying to avoid me by every means he knew,” Regnier said. “He jumped everywhere, not paying attention to humans or things in his way.” 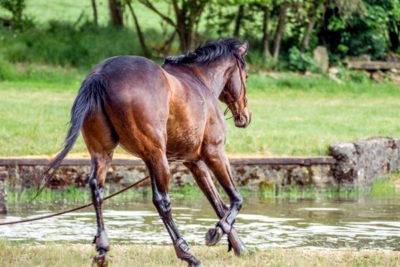 En route, a Savvy Club membership helped. “I found a lot of good advice and support that helped us move on,” said Regnier. “Thanks to my studies, I was good enough in the English language to understand what was said in the videos. We went on this path alone, just the two of us for a time and then met a Licensed Parelli Professional (Estelle Nowak, 1-star LPP) who helped and continues to help us. Two surgeries later, I can now ride again, and after a lot of physical reeducation, Indigo can also be ridden! We passed Level 2 with a ++, and we are playing at Level 3 now. This is exactly the partner I needed, and I’ve learned so much with him. I really think this is my ‘special horse,’ the one I had to find to change everything.”

As Indigo’s biggest cheerleader, Regnier added: “I started my PNH journey with him because he had so much trouble being with humans and I needed a language to communicate with him. He was always afraid around people and overreactive! You should see him now—you would not believe it! He still has a weird look due to his nose and fractures, but he is the 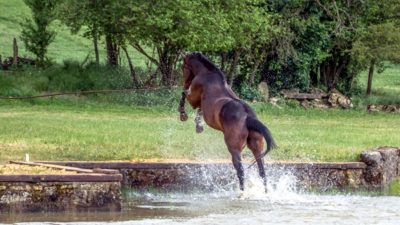 sweetest boy ever and my everyday partner! We do dressage, jump a little from time to time, go on trail rides, and play at liberty without any fences. When I brought him home at 3 years old, I never thought all this was possible. Now he is 10 and seems happier and calmer every day!”

In gratitude, she began volunteering for the Parelli Foundation in 2017. She said: “The Parelli community helped me so much over the years to become the person I am now that it is only fair to return the favor. They also have an amazing team—it’s great to work with them. It’s an amazing feeling, too, to be a part of a team that helps the world be a better place for humans and horses!”