Susan Carr Hanson – A Passion for Youth and Horsemanship

Within the Parelli Natural Horsemanship family, there are a few shining stars who selflessly dedicate their lives to making the world a better place for horses and humans.  One of those people was Susan Carr Hanson. With her own blend of enthusiasm and determination, combined with a riotous sense of humor and boundless energy, Susan encouraged everyone around her to strive to be the best they could be, in life and for their horses. Earlier this year, the world suffered a loss with the sudden and unexpected passing of Susan.

To attempt to convey Susan’s passion, energy, generosity, and kindness into words on paper seems an impossible task. “She inspired people to be better, to be happier, to be kinder, to have more fun, and to appreciate life just by being an example of it all. She loved her family fiercely. She cherished her friends and let them know it. Her animals, especially Johnny, were her heart. She loved life and wanted everyone around her to feel the same way. On behalf of her four sons, Chris spoke at her memorial and said the perfect words, ‘You could live many lifetimes and never meet someone like her.’ How do you even begin to describe someone like that?”  ~ Stephanie Mills, soul sister and friend

To Susan, passion was something that had to be expressed through action. Her passion for children was exemplified in her choice of career, a nurse to newborns and their mothers, but even in her life outside of the hospital, Susan always possessed a special love and devotion to youth. She and her beloved horse, Johnny, were well recognized at parades and other events – not only sporting the red, white, and blue to celebrate the love of her country, but to bring a smile to the faces of the smallest parade-goers. “I remember one parade when she did not ride Johnny because she wanted the kids to be able to enjoy him more. She just let him walk (no line or anything) free beside her along the parade route, and would take him over to the small children so they could see him up close and touch him. She would pretend to pull his tail and get him to back up.” 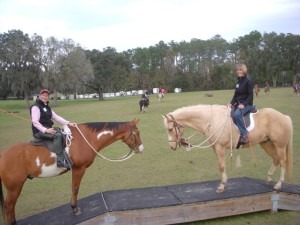 Susan’s example of expressing her passion with actions was repeated throughout her life. Her husband remembers her fondly by saying, “Ideas were never just ideas. Susan was never just a participant. If she believed in something or belonged to an organization, everyone knew her, as she was at every event.” ~ Dennis

After the birth of their first four sons (Jason, Chris, Jeremiah, and David), Susan became a member of her local La Leche League. Never one to be satisfied with just being a member, very quickly Susan became a leader and then moved into supporting the league on a national and international level!   With her infectious laugh and excellent sense of humor, Susan always seemed to find ways to bring a smile to the people she shared life with. “She knew a light-hearted joke would lift someone’s spirits. Occasions were for celebration, whether they were birthdays, holidays, a new horse, a new house…”

Susan’s humor was such an important part of her outlook on life that she took it very seriously. Her husband shares that few people knew that she was actually a professional clown!

“…She often thought it would be fun to be a clown and make children laugh. She found out that if she volunteered with the Shriners, they would teach her to be a clown. She completed training and became “Sookie The Clown” – both the name “Sookie” and her makeup were registered as a professional clown. She cheered up many children in burn units and in parades after that. She figured out how to combine the clown career with her love of horses, and soon would take her horse to kids’ birthday parties and entertain.” ~ Dennis

Just as constant as her love of children, a consistent thread throughout her life was Susan’s love and involvement with horses. Beginning in childhood, her love of riding, showing, and driving came as naturally to her as breathing. In October of 2004, Susan and her friend Stephanie Mills started their Parelli Natural Horsemanship journey together with their three-and-a-half-year-old geldings, Johnny and Bali. From there began a strong commitment to devote time and energy to support the program that she believed in so strongly: 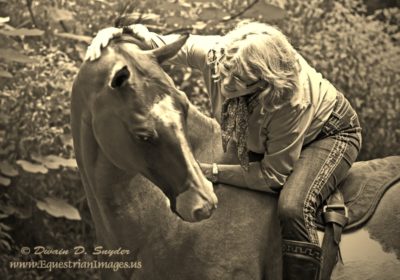 “Susan and I worked 13 tour stops and one Savvy Conference together. She far surpassed that and went on to become a Savvy Club Gold member, participate in Jamborees, Expos, Summits, clinics, and courses and was always a very enthusiastic and vocal ambassador for PNH.  When people would ask her about Johnny’s and her partnership, she never hesitated to attribute their success to following the Parelli Principles and Purpose. They were quite a team and did it all, from competing in America’s Favorite Trail Horse, to extreme cowboy races, to Western Dressage, to a 20-mile American Heart Association Ride, to parades and jamborees, to galloping around the arena, both of them dressed in red, white, and blue with the American flag flying proudly in Susan’s hand! She encouraged young and old alike, those who were in need of guidance, to get involved with the Parelli Program. She and Johnny were living, breathing examples of her commitment. She was ‘living her dream.’”

With Susan’s combined passion for children and horses, it was a natural pathway for her to support youth and the Parelli program. Like so many students who come into the Parelli program as adults, Susan imagined what an amazing future a child would have with horses if they were to start out using Parelli methods. “She would lend out all of her educational material and equipment to kids…and adults who were interested. Some of it came back; some of it didn’t. She didn’t care as long as there was learning going on!” ~ Stephanie

Shortly after Susan’s passing, her family and friends knew that they wanted Susan’s energy, passion, generosity, and kindness to transcend her time on this earth. With Susan having touched so many people throughout her life, they knew that the door was open to creating a legacy that would carry Susan’s memory into the future. With the combined efforts of Theresa Fincher (former Executive Director) and everyone at the Parelli Foundation, the Susan Carr Hanson Youth Memorial Fund was born. Created to support Youth Horsemanship, one of the four areas that comprise the Foundation’s mission, the memorial’s original goal was to receive enough funding to provide a full scholarship for one young person to pursue their horsemanship goals within the Parelli program. Very quickly, the donated funds increased. “I think we were all surprised at how successful the fundraising was. Theresa (Fincher) called and as we talked, we realized that we were close to reaching the goal of helping THREE young people!” ~ Dennis 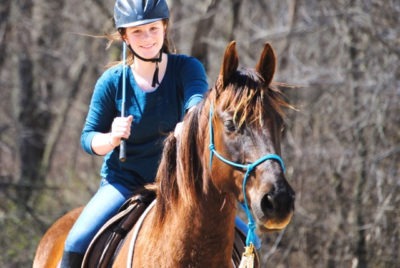 Avery Schaffer is thirteen years old and lives in Madison, Wisconsin. Avery has loved horses since she was very young. When she was ten years old, she started taking her first riding lessons. She loved every moment she got to spend with the horses. However, she quickly realized that she wanted to become more of a partner and learn to better communicate with horses. Fortunately, Avery and her mom discovered The Horse First Farm in Brooklyn, WI, where they met Gretchen Arndt, 2* Junior Instructor. There she “learned what Parelli Natural Horsemanship was and realized that there was a way to connect, trust, and love horses on a deeper level.” Parelli was the missing piece of Avery’s horse puzzle.

Avery is thinking ahead to a future with horses, and after achieving Level 4 through this scholarship, she plans to continue her education in Parelli Natural Horsemanship and possibly specialize in three-day eventing or another riding sport/specialty. Ultimately, she is planning to become a Parelli Professional and assist and encourage youth, teens, and adults as they progress in their horsemanship journeys.

When asked about her thoughts on being the first recipient of the Susan Carr Hanson Youth Memorial Fund, Avery responded: “I feel truly honored. I know this special woman had such a huge impact on so many people’s lives and that she was passionate about Parelli and horses, just like I am!  Her kindness and generosity to support youth is a pretty incredible thing. Being the recipient of this fund in Susan’s honor is so special to me. I want Susan’s friends and family who donated to this fund to know how much I appreciate it, and that I plan to work my very hardest on this journey. I hope to follow in Susan’s footsteps by sharing Parelli with others and also cherishing the Parelli community, just like she did.” ~ Avery Schaffer, thirteen years old

Susan’s family is very thankful that the fund grew so quickly and that a young girl is already benefiting from it. “When I donated, it was very personal and a feeling like I was helping to complete something that Susan would have loved to have started. Years from now, maybe we’ll be hearing about a child who is being mentored by a Parelli Professional named Avery Schaffer. How amazing would that be!” ~ Stephanie Mills