A Beautiful Partnership: Kaye Harris, Molly the Pony and the Parelli Foundation

Most people residing in North America can vividly recall the news reports and stories surrounding Hurricane Katrina that made landfall in late August 2005. In

addition to the human loss and suffering, it was the stories of the unexpected plight of thousands of pets and livestock left behind by evacuating owners, that touched the hearts of so many.

This was the reality for one such pony; a pony named Molly.  She was just one of hundreds of horses abandoned by owners who were forced to leave New Orleans without their beloved pets.

On November 6, 2005, Molly was moved to Kaye Harris’ half acre “city barn” located within the town limits of New Orleans.  Although Kaye’s farm had suffered wind and rain damage, and was without power, Kaye had resourcefully collected food and water and it was a safe haven not only for her own ponies, but for a few hurricane rescues that were in need.

Molly’s story then took another tragic turn.  Just a short time after arriving at Kaye’s, a rescued pitbull escaped his enclosure and attacked Molly.  Her injuries were extensive and Kaye and the veterinary team were uncertain whether the 15 year-old pony could survive the serious injuries to her legs and abdomen.  But the strong willed pony refused to succumb to her injury, even as it became apparent that the damage to her right leg was too severe for her to endure for the long term.  Kaye and her vets saw something special in this plucky little pony and the veterinary hospital at Louisiana State University agreed to give Molly a chance at life by amputating her leg below the knee.  Immediately Molly greeted life with 3 legs, able to move about, graze and lay down with ease. Although her immediate prognosis was good, Kaye knew that Molly would face a reduced quality of life with three legs. With Kaye as her champion, and the hand of fate stepping in, Molly was given the gift of a custom fit, prosthetic leg! 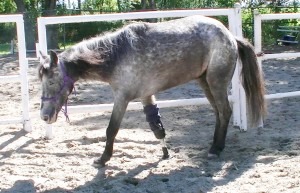 Suddenly, this little pony, who had coped with so much tragedy, became a symbol of hope and possibility.  In addition to being a survivor of Hurricane Katrina, the story of her injury and success with her prosthetic leg was inspiring to children and adults facing similar mobility issues.  The hope that Molly instilled in people soon had Molly and Kaye and family travelling throughout the States sharing Molly’s message, “It’s not about what you can’t do – it’s about what you can!”  (mollythepony.com)

During the many years operating her pony business and then touring with Molly, Kaye had always had a keen interest in the natural horsemanship movement.  Having been introduced to Monty Roberts and to the John Lyons training method, Kaye had been quietly searching for a better way to train the rescued ponies she used for her business.  Ponies that were “dull, afraid, spoiled rotten and at times downright nasty!”  In 2010, Kaye had her first official introduction to natural horsemanship during a chance meeting with 3* Parelli Professional, Mollie Vacco while attending a fundraiser in New York.  Kaye was immediately drawn to the Parelli program because “it was packaged to make it available for average people!”  With her eyes opened to what was possible, Kaye crossed paths with the Parelli program a second time in 2010.   As the night watchman for the stabling at the World Equestrian Games in Lexington, Kentucky, Kaye had a chance to see the Parelli program in action as she had an up close view of Linda and Pat Parelli playing, riding and presenting throughout the duration of WEG. By the show’s end, equipped with some basic equipment and video education, Kaye headed home to Louisiana to begin her own natural horsemanship journey in earnest.

But like many who begin the Parelli program, the learning curve can be steep at times.  Kaye’s busy schedule, coupled with a lifetime of ingrained habits, got in the way of making real progress. Over the next few years, Kaye faltered as she attempted to learn and apply the program to the ponies in her life.

In 2013, Kaye, her husband and son attended the Parelli Horse and Soul Tour held in Lexington, Kentucky.  Her interest in natural horsemanship was re-ignited by the passion and inspiration presented at the tour stop.  Resolved to continue learning the program, Kaye headed back to Louisiana with a membership to Parelli Connect and some additional equipment and digital education.

Kaye began to study and play and learn the basics of natural horsemanship and she liked what she saw! Although Kaye had always had a kind, gentle way with the equines she acquired throughout her life, it took her a long, long time to see even the tiniest changes in her ponies. She will laughingly tell you that the Parelli-ism, “take the time it takes so it takes less time” caused her to realize that natural horsemanship was actually a shortcut to achieving results with her ponies, compared to the time it took her to achieve results on her own!  But even with all the positive changes, Kaye soon discovered that she was challenged in a way that she had not anticipated.  While logically she could learn the program and understand it, Kaye struggled to actually apply it to her ponies. “I knew I was on the right track instinctively, but I wasn’t thinking about it in clear terms.”  Kaye knew more than ever that she needed help; but there were no Parelli Professionals in Louisiana. 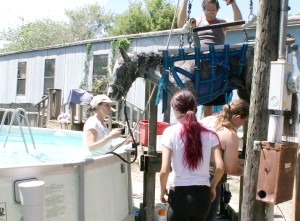 In late 2014, Kaye contacted the Parelli Foundation to inquire if there was help for someone in her situation. With the Foundation’s areas of focus: Therapeutic Horsemanship, Horse Welfare and Youth Horsemanship, Kaye knew that her story touched several of these areas and hoped that the Foundation could provide her with some assistance in accessing the education she was seeking. After sharing her story, and making several phone calls to arrange the details, Parelli Professional and 2-Star Instructor Nancy Slater was on her way to Louisiana to lend support to Kaye, her family, her students and her horses.

“…although Kaye had been following the program and watching the videos for quite some time, she was totally locked up and unconfident to try any of it on her ponies! Normally a very strong and forward woman, Kaye was afraid of failure.” ~ Nancy Slater

Fundamentally, Kaye knew the Parelli program fit with her core values and her persistence paid off. By the end of the weekend, under the skilled instruction and guidance of Nancy, Kaye confidently filmed (and passed!) her Level 1 audition!

A journey that took her from her local pony business, to the tragedy of a massive hurricane, to a pony named Molly inspiring hope in millions, the road that Kaye Harris has been on is far from ordinary.  But Kaye will tell you that she is just an average person seeking to be a little better for her equine family each day.  And, maybe in the future, New Orleans, Louisiana will finally have its first resident Parelli Professional!  One with a barn full of pony partners and a very special little lady named Molly to share with the natural horsemanship students in her corner of the world.