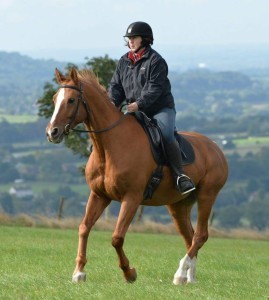 The beginning of Lisa’s story is common to so many women. A horse-loving girl who owned and rode her own horse regularly in her youth, she disconnected from horses for a time, as career and family became her focus. Years later, Lisa’s loving husband encouraged her to reignite her passion for horses by giving her “a few lessons” as a gift. But here is exactly where Lisa’s similarity to other horse owners abruptly ends.

As Lisa began to explore the possibility of delving into horse ownership, a horse in a nearby town was fighting for his life under deplorable conditions. Found starving and standing up to his knees in mud, Jack had been rescued a few days before but was in desperate need of a home. Against every bit of logic and all “what not to do when buying a horse” suggestions, this starving, petrified horse was delivered to his new home with Lisa, on Christmas Eve in 2004. Lisa, without so much as a halter for her new partner, had just embarked on an unimaginable adventure!

In their first year together, Lisa’s focus was to help Jack regain his health and trust in people. But his severe malnourishment complicated this process, and several times his life was threatened; colic and other metabolic issues related to the starvation surfaced. Slowly, the painstaking care Lisa bestowed on him began to show through – his bones began to recede and a deep, rich, shiny, bronze-orange coat emerged. And he grew! From a small, scrawny frame, Jack’s warmblood breeding sprouted him up to over 16 hands!

In addition to his large size, Jack’s return to health also brought another unexpected development. Lisa had spent much of that first year just hanging out with Jack in an effort to gain his trust. She would sit for hours in an attempt to catch him in the paddock, and they would go for long walks on-line while he regained his strength and health. But along with the energy and vibrancy brought about by good nutrition and care, the true extent of Jack’s fear and mistrust of humans became evident: he was almost unmanageable. Jack refused to be touched; leading him took more than a single person; and on several occasions, Jack blindly bolted in sheer panic, running through fences. Lisa soon realized that the quiet, subdued horse that had first arrived in her yard was actually a shut-down, depressed version of Jack.

Eventually, it appeared as though it was time to progress with Jack’s development under saddle, but his lack of confidence and mental baggage from the past caused him to regularly rear and bolt. Lisa’s own confidence quickly spiraled downward, due to frequent falls from the saddle and regular hospital visits for several serious injuries.

Lisa knew she was in over her head. She needed help and had conversations with several local trainers, but their methods and answers seemed harsh and did not address or resolve the root cause of the problem. She was told more than once that Jack was dangerous and that she should sell him and get herself a nice, safe, quiet horse. Finally, as so often happens: in her darkest hour, Lisa came across an ad for Parelli Natural Horsemanship. After placing a tentative call to her local Parelli office, Lisa soon found herself intrigued by the friendly, knowledgeable voice on the line, speaking about a training method based on studying horse behavior – something that really spoke to Lisa’s innate beliefs about horses. Later that same day, a package including the basic equipment of a carrot stick, halter, line, and training video for the Seven Games was en route to Lisa and Jack!

Working alongside Parelli Natural Horsemanship, The Parelli Foundation is a non-profit organization with four part mission – one piece of which is to help make the world a better place for rescued horses. The Foundation is working to design, create and make available supplemental training designed to help Parelli Professionals, rescue staff, volunteers and individuals handle the special needs of abused horses of all types. Currently, The Parelli Foundation maintains a US database of resources that is valuable to those involved with rescuing and rehabilitating horses in need and have plans to expand this service into other areas of the world in the future.

For the next several months, setting aside all thoughts of riding, Lisa and Jack played all seven Parelli games on the ground. The change was astonishing! Lisa had accessed a language to reach Jack and he was thinking instead of reacting. However, right from the beginning as with any pursuit involving Jack, the journey had its share of challenges. With love and language becoming more solid each day, Jack began to challenge Lisa’s leadership with teeth bared and hooves flying! But at her core, Lisa was confident that she was on the right path, and with natural horsemanship education just a click away and access to Parelli Professionals just as simple as picking up the phone, she had the support necessary to step up and exert her leadership in her partnership with Jack.

Lisa & Jack began to progress, first On Line and then at Liberty. Progress in the saddle happened slowly, but Lisa’s confidence started to surface as she relied on her play time on the ground to assess Jack’s rideability each day. Both Lisa and Jack became more confident while riding, and they began to venture further from home, both on the trail and attending clinics. Jack flourished mentally, emotionally, and physically, and Lisa’s missing confidence and love for Jack grew steadily.

Today Lisa and Jack are solid, devoted Level 4 Parelli students. Over the years, they have made steady progress and have pursued their natural horsemanship education by attending numerous clinics, including a Fast Track in 2011, and multiple visits to the James Roberts Foundation Station. They take regular lessons from Parelli Professionals and other professionals in the horse industry. In 2013, Lisa accomplished her dream and competed at a local dressage show with Jack. After starting with a horse that was virtually unrideable, today the pair head out down the trail solo, both safely and confidently.

For the horse that refused to be touched, caught, led, groomed, tied, or mounted and was impossible to bridle, saddle and dangerous to ride – the journey of Lisa and Jack is a beautiful example of how natural horsemanship gave this partnership their happily ever after. Together with Lisa’s perseverance and determination not to give up on Jack, the Parelli program helped give her the tools to turn their nightmare into the dream that she always imagined was possible. There is some irony that his full name is “Just Jack,” but there is certainly nothing common about this horse, his partner Lisa, or the journey they have been on to arrive where they are today.

The necessary skills, patience, time commitment & monetary expense required to successfully rescue a horse can be challenging for every person involved. To provide support to people in Horse Welfare situations, The Parelli Foundation is working to develop a home study program with education specifically designed for horse rescues, to help people become more effective in giving these horses the gift of a bright future. The Foundation is also focused on facilitating strong, supportive partnerships between Parelli Professionals and horse rescues to help them achieve successful outcomes in rehabilitating abused horses.

Has the Parelli Foundation touched your life in a meaningful and inspiring way?  We would like to hear about it. If you have a story to tell, and the Foundation has helped in some way, write it down in 1000 words or less and send it using our contact us form, along with three photos to illustrate your story.  We may use your story at our web site or in other ways.