Hidden Passion for Relationship with Horses 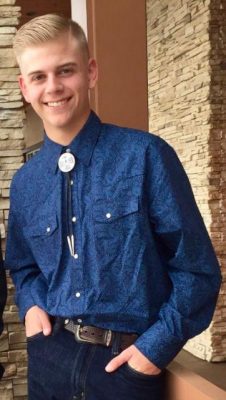 As an infant I held Garrett Eigenhuis and bounced him for quite some time to get him to sleep. When he was a three year old, I remember him dashing across the front yard and wrapping his arms around my legs when I arrived at his home. Now at seventeen and 6’1” tall and a Parelli Foundation scholarship recipient, his love and deep passion for horses and the Parelli method of natural horsemanship has ignited in me a like passion…a passion I never knew I had.

My father and brother were “into horses” as I was growing up. I remember them going away on horseback riding trips and spending time with their two horses on a horse property my father leased. My involvement with horses back then was minimal; partly because I wasn’t invited to participate, and partly because I was traumatized when I was young when a horse ran away with me on a trail ride. In the 1970’s we moved to a 50 acre ranch where those same two horses were kept. My experiences there included facing my fear and getting on one of the horses, and secondly, getting too close and being bitten by the other. All that changed for me though one day in May 2016; a day when I watched Garrett “dance” with his horse “partner” Pal in a way that I didn’t know was possible. Something within me ignited as I watched them together; it was gripping and heartfelt; and it changed me. 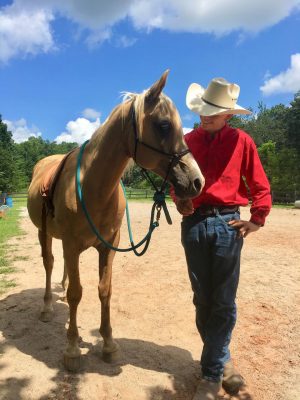 Garrett had been involved in a natural horsemanship youth program for a few years up until that time. Victory’s Gait at Sweet Dream Farm focused on small farm management training along with instruction in Parelli Natural Horsemanship. Robin Harris, a 2 Star Parelli Professional, would come periodically to teach and work with the students in the development of their skills. In May of each year an Achievement Picnic would be held for families and friends of the students to watch as each student demonstrated the horsemanship skills they had honed over the year. The “dance” Garrett did with Pal that day in 2016 was done at such an event. Let me tell you what I saw that afternoon.

It was a very hot and humid May afternoon. Families and friends of the students were clustered on one side of the arena, huddled under pop-up shelters to escape the blazing sun. Music was playing over the loud speaker, with the students and their horses gathered at the gate ready to begin their demonstrations. Each student had chosen a song that was to be played while they “played” with their horses. It was now time to begin.

One by one the students entered the arena with their horses, carrot stick in one hand and lead rope in the other. The excitement in the air was tangible, and was added to by the cheers and encouragement of the audience.

Then it was Garrett’s turn.

As the arena gate opened and he walked in with Pal, I was struck with the fact that he had NO lead rope and NO halter on Pal. All he had was a carrot stick in hand and a big smile.  I surmised that this demonstration was going to be different. I was sitting right in front of the arena fence and positioned myself so I could see them between the slats. The music began and he and Pal started their routine. 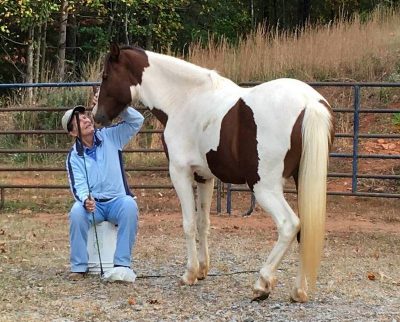 I can still see it so clearly in my mind. There was a rhythmic gracefulness between the two of them that was both soft and flowing. Garrett’s use of gentle body language, energy management, and facial expression brought out the strength and beauty of Pal’s movements around the arena. There was a connection between them that was focused, respectful, and responsive. Garrett showed love, language, and leadership with his horse that I’d never seen before. They were one; they were partners. I saw relationship, trust, and confidence on both their parts. It mesmerized me as I watched. I wanted to learn to “dance” with a horse as Garrett did. I wanted that freedom…that relationship. It was then that a hidden passion ignited in me. I can’t explain it, but it was real. I was captivated by what I’d seen; captivated to the core!

Since that day three years ago, my life hasn’t been the same. I ended up volunteering with the Victory’s Gait Program where Garrett had trained, and I too began learning the basics of the Parelli method. I then began using those skills with Garrett’s family’s horse Shiloh. Over time he and I both grew in our trust of each other, and our confidence in the “dance” we were learning together. I spent many hours watching the Parelli DVDs, seeking to learn about the philosophy and better master the skills. Garrett was instrumental in my progress, as he mentored me and answered so many of my questions. And he continues to do so. He is so knowledgeable about equine nutrition, health care, and the Parelli method. He is still growing in all this, as am I. But without his guidance, patience, and love for horses, I would never be where I am today.

As I write this, Garrett has just returned from a Cow Clinic with Dave Ellis, a 6 Star Parelli Professional. His love and passion for horses and the Parelli way has never wavered. He continues to mentor me as I work on my Online Level 2-3 and Liberty skills with Shiloh.  Just yesterday Garrett worked with Shiloh to get him ready for riding…and actually rode him around an arena for the first time. I guess this means the development of my Freestyle skills with my equine partner is right around the corner!

In conclusion, a significant point worth mentioning. Garrett Eigenhuis and his family are like “family” to me. As I noted in the beginning, I held Garrett when he was young, and I’ve watched him grow up to be an intelligent, respectful, and passionate young man. There are fifty years difference in age between us…that’s right fifty! My point? Our youth have a great deal to contribute to the ongoing propagation of Parelli Natural Horsemanship. With training and opportunities afforded them, they can continue to make the world a better place for horses and humans. Garrett, a Parelli Foundation scholarship recipient, ignited a hidden passion for natural horsemanship in me that has changed my life.

Thanks Gar….Shiloh and I are forever grateful!