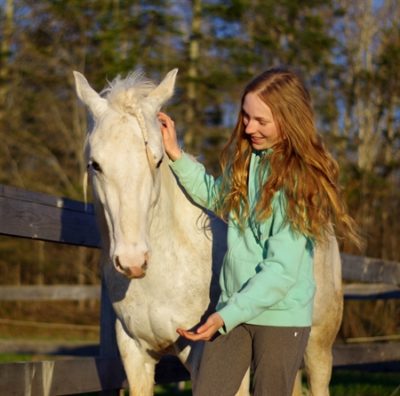 When Ada Draghici, a thirteen-year-old from Nova Scotia, Canada, applied for the Parelli Foundation Future of Horsemanship scholarship on January 13, 2016, she knew she had to be patient in waiting for an answer. “Because we have not provided a scholarship to anyone outside the United States before, we will need to move slowly on this one,” Marilee Donovan, Director of Programs, wrote to Ada’s mother.

At that time, Ada had been a Parelli Natural Horsemanship (PNH) student for three and a half years. When she first got into horses, she was very excited to learn to ride, but quickly realized two things – one was that the horses were unhappy; and two, that there was more to horses than riding. Ada’s parents had no experience with horses, but when she insisted that there must be a better way to interact with them, her mother typed “natural horsemanship” into the search engine. “Intuitively, it seemed like the right term to use,” her mother said. When they discovered PNH, Ada knew her mission would be to help create a better world for horses and humans.

There were no Parelli instructors in Nova Scotia, but Ada’s parents had always tried to provide an environment that encouraged her to fully engage her interests. When she was ten, they helped her connect with other PNH students. For the first three years, she played with half-a-dozen horses owned by members of the small natural horsemanship community. These experiences made her realize that one day, she too would like to empower humans to be the best they could be for their horses, just as her mentors empowered her.

In May 2015, her parents helped her buy a four-year-old gelding, Kai. Her mother would drive Ada to the only natural horsemanship barn in Nova Scotia, an hour away, up to five days a week, so that Ada could do what she loved.

Despite only being able to afford occasional lessons, Ada passed Level 2 On Line, Level 2 FreeStyle, and Level 3 Liberty, all with two pluses, within the first four months of being Kai’s partner. While waiting to hear from the Foundation about her scholarship application, she was determined to work hard and film her Level 3 On Line audition on the first day she could take Kai into the outdoor arena, which had been snowed in. She accomplished this and worked on her Level 3 FreeStyle.

She had done well learning from the DVDs, but to receive the scholarship and the opportunity to take regular lessons from a Parelli Professional would be a dream come true. Reading Marilee’s emails intensified Ada’s feeling that there was a larger natural horsemanship community out there, with many people working hard to help her reach her goals. This motivated her to start a Facebook group for Parelli youth: Parelli Youth Community, which came into existence on March 22, 2016. Ada was eager to meet other PNH students her age and start building new friendships.

As the Future of Horsemanship scholarship program is based on matching a student with a sponsor, the Foundation initially looked for a way that a Canadian sponsor could make a tax-deductible charitable donation to support Ada’s scholarship. “Ada’s application has raised this issue to a much higher priority,” Marilee wrote. 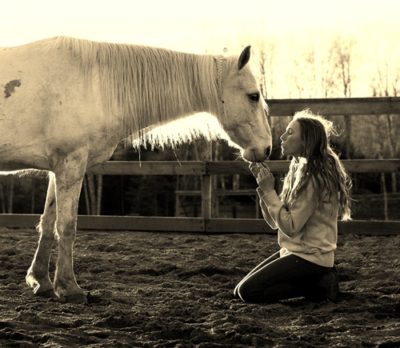 “Rather than seek a local sponsor as we had intended, the Foundation decided to spend dedicated youth funds to sponsor this first youth outside of the United States,” reported Marilee.

The following weeks were spent finalizing equipment lists; scheduling clinics and lessons; discussing the various ways Ada could start fulfilling her responsibilities as a scholarship recipient; and most importantly, reconnecting with Farrah Green, a three-star Licensed Parelli Professional with whom Ada had had a lesson in April 2015 in Quebec.

Farrah and Ada are unfazed by the long-distance coaching relationship. Ada is a tireless researcher and natural emulator; after just a few video submissions and several inspiring phone conversations, she couldn’t be happier with how things are going. “Ada can hear or watch something and she’s got it,” Farrah said. On April 30, Ada learned that she and Kai had passed their Level 3 On Line with the score of 3+.

Ada is excited and grateful

Ada is excited and grateful to be the first Canadian recipient of the Future of Horsemanship scholarship and vows to always keep learning and sharing what she learns. She is optimistic that we have the power to change the world together when we share knowledge and care about horses and each other. This optimism is contagious and has helped her follow her gut throughout the last four years. She never wavered in her dedication to do the best she could for every horse she played with, despite being bullied and ridiculed by well-meaning adults. Now she has a mentor who understands and shares her passion, and financial support to continue her journey to Level 4.