Passive Persistence in the Proper Position at Achaius Ranch

Achaius, which means “horseman” in several languages, is the name of a ranch serving upwards of 200 youth in Ladoga, Indiana. Co-founders Elisha and Rodney McCulloh received a $2,500 grant in 2018 and welcomed 3* licensed Parelli Professional Tiffany Rowe.

When asked about teaching the staff, Tiffany said: “Achaius is a special place! You can feel the positive energy when you arrive. I love going there. I am always excited about working with the youth and horses at Achaius. They have put so much time and effort into choosing the right horses for this specialized discipline and spent many more hours in developing them for success.”

A first-time student told Tiffany that she felt the clinic really helped her to understand and be prepared to lead sessions. “In particular, she learned that horses will respond at phase 1 when you set it up right and how putting the relationship first was crucial,” Tiffany said. “She worked with both Iago and Merlyn during the clinic. For the first time, he responded to everything she asked of him at phase 1, and she had an amazing experience with him at liberty. These insights made a huge impact on her horsemanship and on her leadership as she worked with kids all summer. She noted that, ‘When you put the relationship first, wonderful things can happen.’ ” 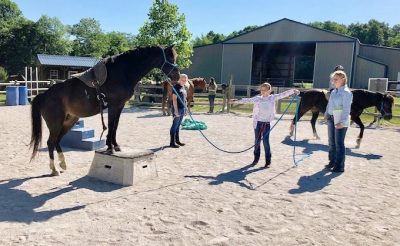 Because the ranch horses are characterized by Tiffany as “well into the Parelli program” with great foundations, she said, “We were working on refinement, which is so exciting for me as an instructor.”

Elisha, the program director and a licensed clinical social worker with training in trauma recovery, oversees 90-minute one-on-one sessions with participants. “They help with chores and then learn natural horsemanship (groundwork and riding) using the Parelli method. Most kids participate in an average of six sessions per year, and many participate for multiple years. We also serve groups from community mental health centers, Boys & Girls Club, etc.”

Elisha described one transformation as follows: “Caci (not her real name) arrived at Achaius Ranch feeling so nervous that she struggled just to emerge from the protection of the family car. She wondered what others would think of her. What would she be asked to do, and could she do it? Would she look foolish? Would she be accepted or judged? Despite her misgivings about contact with humans, Caci showed no fear of interacting with 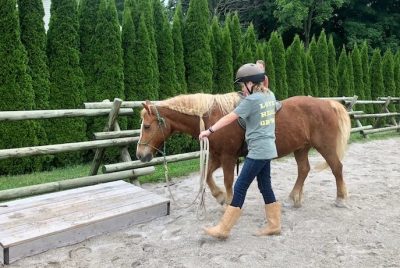 the horses. Though reluctant to ride them, she clearly enjoyed watching, touching, and silently communicating with them. And they responded well to her gentleness and affection.

“It took Caci a long time to finally decide to get on a horse. But no matter: We do a lot of groundwork, so there was plenty of opportunity for her to learn natural horsemanship skills, communication, herd dynamics, and leadership methods. With each new task introduced, Caci was nervous to try and gave up quickly when she felt she was ‘doing it wrong.’ But hiding beneath the surface, she was actually a very brave young lady. And she was a quicker learner and more competent than she realized.”

Session leaders refer to the Parelli phrase “passive persistence in the proper position” when they encourage the horses to act like partners and solve puzzles. “We set up the necessary clues using specific motions, guiding the horse with light pressure aimed precisely to make it as clear as possible so that the horse can ‘win’ the game by moving in the appropriate direction,” said Elisha. “We keep our actions clear and consistent, repeating them as often as needed, without expressing frustration or impatience, for as long as it takes until the horse makes even the slightest movement in the desired direction. Then, as Pat says, we ‘expect a lot, accept a little, and reward often.’ Once the horse starts to understand and respond as desired, it gets rewarded with a release of the pressure and a pleased attitude from us (and often with ‘cookies’ or scratches). Then we can build upon that understanding and ask it to do more and more. 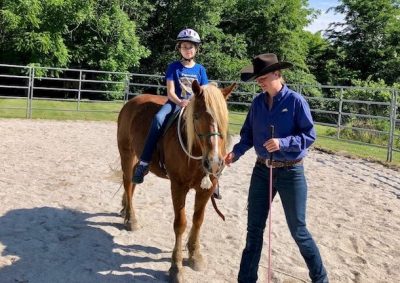 “With Caci, passive persistence in the proper position looked like showing her a new skill, putting the lightest pressure on her by asking her to try, standing by with an attitude of encouragement and affirmation, and patiently waiting for her to ‘go left brain’ and figure it out. Each time, Caci immediately expressed doubt that she could do the new thing. And each time, sometimes after multiple tries, she succeeded in doing that very thing. Without fail, she felt elated when she succeeded. Her confidence grew by leaps and bounds. Like rays of sunshine peaking through a mostly cloudy sky, big smiles on her face spoke for themselves.”

Tiffany summarized the endeavor: “The people at Achaius are clearly dedicated to the youth and the horses. I know they will have success and touch hundreds of youth in a positive way through the year because they are set up for success. I leave feeling energized that I have played a part in such an amazing program that will encourage and help heal so many youth who need hope. I may not be able to be hands on with the youth who come through Achaius, but I can support them as an instructor, which is what these facilities need.”