Romeo Has a Future 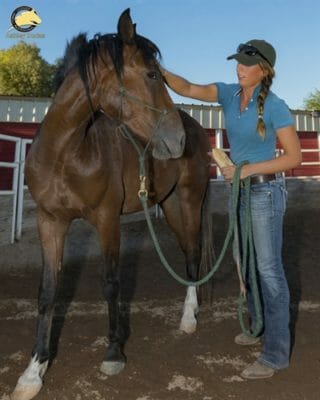 “I dream’ed a dream to-night,” said Shakespeare’s Romeo: a dream of love reviving life. When Kim Meagher came across Romeo, a terrified three-week-old sorrel bay with his dam at a kill auction, both with gaping wounds, she too dream’ed a dream – that the safe haven she had previously provided for 200 horses would give them both a chance for a future.

Twenty-one years ago, Kim’s entry into horse stewardship was fatally disrupted: while away from home on July 4th, fireworks caused her recently acquired filly to panic. Upon returning, Kim found Brownie dead, her neck broken. She was awakened to the desperate plight faced by thousands of unwanted horses in the ensuing search for a give-away; as a single mother of two, she could not afford another purchase. She channeled her grief into action, establishing the Wildhorse Ranch Rescue.

Her operation in Gilbert, Arizona takes in the most severe cases. Romeo, the injured colt she met at auction, certainly fit the criteria. She remembers, “He was so frightened. He had large, open wounds on his shoulder and hindquarter. It looked as if someone had tried to brand him, but wow, they did a horrific job on this poor little horse. He would not let any of us near him and tried to hide under his mother, Nyx. She was having nothing to do with humans and would not let us anywhere near her boy.”

Once she had founded the rescue, Kim investigated various natural horsemanship approaches. She found that Parelli Natural 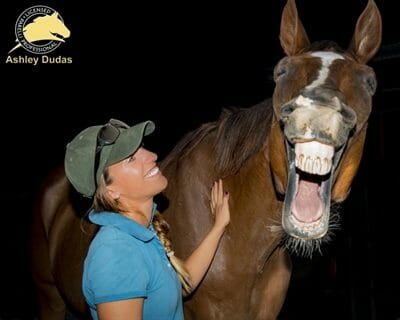 Horsemanship offered the comprehensive instruction she needed to stay safe, while also giving extremely abused rescue horses a chance for rehabilitation. She witnessed the fundamental changes made possible through application of the program, even with horses in the direst of need such as Romeo. He has changed from being untrusting and fearful into a horse who is “curious, fun, and very athletic, a beautiful boy inside and out, who wants to learn.”

However, as an exuberant three-year-old, Romeo was not an easy fella. To further his chances of survival in humansville, Kim sought the assistance of a Parelli Professional; 2-star Parelli Professional Ashley Dudas answered the call. It was a good match: Ashley’s anxious and explosive Arabian mare was the reason she started her Parelli journey. On the verge of giving up on April and horses altogether, she attended a demo with Pat and Linda and was captivated. By immersing herself in the program, she became the human that April needed. Ashley’s understanding of Romeo’s challenges, her colt-starting experience, and advanced Parelli Natural Horsemanship education provided her with the essential skills and insight for making a difference in his life.

During her first session with Romeo, she observed that his pushy behavior was coupled with sensitivity to leadership and need for security.

When the Rehoming 4 Life Challenge and Adoption program started, Ashley agreed to undertake Romeo’s full care and devote the hours necessary to advancing his development. She has been involved with the Foundation for most of her career as a Parelli Professional, inspired by its ability to provide horses and humans “with the help they need where they need it.” Under her guidance for the past few months, Romeo has changed from a reactive prey animal into a soft, willing partner.

Ashley describes Romeo as a medium-spirited Left-Brain Extrovert. His dream partner is that special someone willing to go slowly for teaching, but who understands that once Romeo gets it, he doesn’t need endless repetition: someone whose ambitions are within the realm of lower-level English or Western performance, and who can appreciate Romeo’s strong desire for human interaction.

Kim’s heartfelt dream is “to show people how a horse can turn out if given the chance to get Parelli Natural Horsemanship training. We believe that all people can live their dream with their horse, whether he is a magnificent Atwood pony or a horse with a past. Our highest goal would be that the Parelli Foundation’s Rehoming 4 Life Challenge is so successful that it eventually puts all rescues out of business!”

Romeo is a testament to the Parelli Natural Horsemanship principles of love, language, and leadership offering the possibility of transformation. Through the efforts of Kim, the Parelli Foundation, and Ashley, Romeo has a future…all because someone dream’ed a dream of love.