A Rough Diamond is a Jewel – Part One 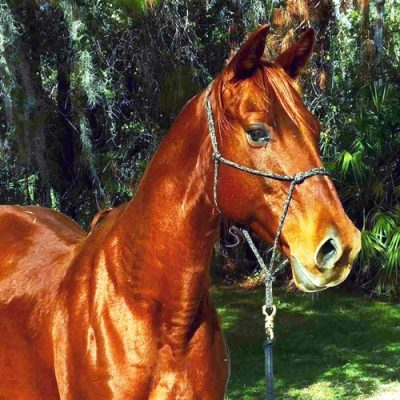 Miss Jewels Bar was born a Left Brained Introvert. What this means is, genetically speaking, her personality or ‘Horsenality’ if you will, is one that is naturally confident, calm, and thinking. She naturally is prone to reserve her energy, preferring to not over exert herself to the point of perspiration. She enjoys standing in the shade, pinning her ears and squealing at herd mates when they come to invade her space.

,She is a well bred Quarter Horse, solid red, and shiny like a copper penny. Cow horse through and through, her owner bought her to work cattle on a ranch and compete as a roping horse. He paid good money for her and thought she’d do him proud.

A sensitive mare, she thought the cowboy was a bit pushy and demanding. He thought she was disrespectful, with the glare in her eye, ears pinning, and tail swishing. It didn’t take long before the two of them were strong in their opinion of the other’s negatively, and it was on like Donkey Kong!

She got nasty and he got angry. He lounged her to get the buck out, but she fought him. He rode her and spurred her, and she fought him more. When he had had enough of the nasty, red mare dominance toward him, he got so angry and aggressive, that he frightened her. So much so, she suddenly believed her life was in danger! 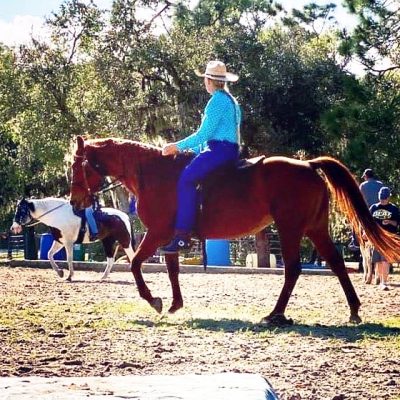 No longer feeling safe, Jewels began to dance and prance under saddle. She wanted to run back to the barn, the trailer, the pasture, to safety. Her owner was happy; the nasty behavior was finally gone! He kicked her up into a canter and she moved out. Hooray!!

But something had flipped in her brain. Yes, she no longer had a fight to give. And she no longer balked or bucked. Instead, she ran. Trouble was, there no longer was a slow or a stop. And, she would twist her face in a distorted way; her feet nervously searching for a way to escape.

Her owner now saw there was a new problem. No matter what he tried, pulling on her bit didn’t work, nor did just allowing her to run to exhaustion in deep sand in the orange groves. She could spin and spin in circles till he felt like he was in a washing machine stuck on the spin cycle! He lunged her till she was dripping in sweat, but she never slowed. And there, always present, the twisted, distorted face.

He was not a bad man. He had bought Jewels with no intention of harming her. The problem lay with not knowing how to work with a horse like her. He was confused by her behavior. Why was she so difficult? What was wrong with her? She acted so crazy! 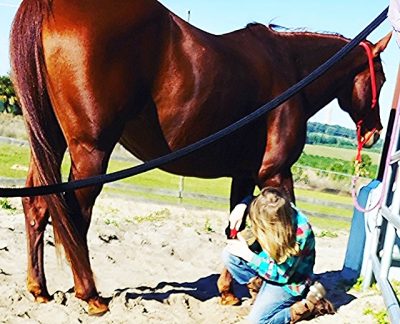 He tried and tried to figure the twisted puzzle out to no avail. She just never stopped and finally, he gave up on her. He called my husband, and told him to have me come get her.

Of course, I said no at first. I have plenty of horses to feed, I noted. But I knew I needed to go pick her up. To my surprise, he had two horses standing ready to load up in my trailer when I arrived! I felt bad leaving the young bay Cracker Horse…only Jewels would be leaving with me.

Jewels would twist her face any time while in my presence. She looked ugly. Obsessively twitching and making strange noises in her throat. It would get worse when I tied her, saddled her, and bridled her. When I climbed up in the saddle she danced and spun, if you loosened the reins, she ran. She would sweat a nervous sweat, it was as if you could see her mind racing behind her unseeing eyes. She would look through you, not at you.

I rode her on the back trails, seeing if I could get her to calm down and focus. I allowed her to run, petting her, talking to her. There was nothing but fear. I turned her towards the acres of palmetto filled pastures, hoping she might look down to see where she was going. She continued to run fast. I headed her for a small bush and gently turned her around and around it, expecting her to see there was nowhere to go. She never slowed. She was locked in fear, with her crazy face on.

Then, in desperation, I took hold of the reins in both hands, and headed her straight for a tall pine tree. When we ran to it, I said whoa and sat deep in the saddle. She hit the tree with her forehead. Then she frantically looked side to side, and I headed for another, and another, each time I sat and said whoa. She finally stopped, and I dismounted.

I walked her back and untacked her. I was amazed at how much of a Right Brained Extrovert she was. Right Brain horses can’t think, and I had never seen an extrovert with so much go!! Yes, she had become crazy because of her experiences. But I knew that just like people with PTSD (post traumatic stress disorder), there was a way of helping her with the right course of action.

My experiences as a Parelli Instructor, and the individualized help I had received from Linda Parelli with my Josh mule years before, gave me lots of strategies. I used 10 or more strategies on Jewels for several months, but felt I needed more help. I contacted Linda. She told me to bring Jewels out for a look…