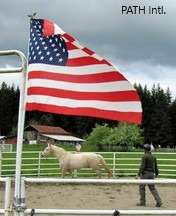 George was an Army Veteran who suffered from both physical and psychological injuries after bravely serving his country during Operation Iraqi Freedom. After seeing the impact of 9/11 on friends and family living in New York, George vowed to do whatever he could to protect his loved ones and his country. During his deployment, his caravan was struck by an IED. The proximity of the impact caused George to develop a traumatic brain injury, chronic physical pain, and post-traumatic stress disorder (PTSD). After being medically discharged, George felt hopeless. Upon returning home, he felt misunderstood and disconnected from all friends and family.  George was desperate for relief and trying countless therapies to help him feel “normal” again. None of them worked and George began to feel more hopeless. He even had thoughts about ending his life, just to escape the physical and emotional pain. One day, a friend mentioned hearing about equine assisted counseling and encouraged George to call for an appointment.

George arrived at his first appointment anxious and unsure. He’d heard of “equine therapy” but was concerned if he would be understood and if it would really help treat his PTSD. At his first appointment, his counselor explained that equine assisted counseling is a unique type of psychotherapy that takes place through interaction with horses and other equines. Unlike other types of equine assisted activities that focus on learning horsemanship or riding, George would be collaborating with his counselor to establish specific treatment goals related to PTSD. To meet these goals, his counselor would use psychotherapeutic interventions through interaction with the horses. 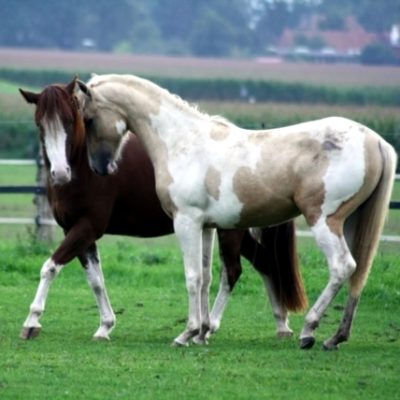 George participated in a form of equine assisted counseling called Relational Equine-Partnered Counseling (REPC). This approach is based on the premise that, like the therapeutic relationship between a client and counselor, the relationship created between clients and equines can be healing and increase the likelihood of positive clinical change. Similar to office-based counseling, the goal of REPC is to help the client gain insight into their thoughts, emotions, and behaviors in a way that will improve their quality of life. REPC can be used to treat a variety of mental health conditions such as trauma, PTSD, depression, anxiety, anger management, grief, self-esteem, attention problems, family/couple relationships, and child behavior problems. The difference between REPC and office-based counseling is the approach taken to reach these goals. Clients frequently come into counseling uncomfortable or afraid to verbally communicate basic needs or emotions.  As a result, office-based talk therapy may feel very intimidating for them. REPC takes place outdoors in the relaxed atmosphere of a pasture where clients may not feel as pressured as in a traditional office setting. The presence of the equine in the counseling session increases the client’s sense of emotional safety by decreasing anxiety, facilitating openness, and helping the client express feelings and process any past trauma.

In REPC, the equine is treated as an equal participant in the counseling session – one who is encouraged to act in a natural way in the environment and whose actions, reactions, and experiences are just as valuable to the therapeutic process as those of the client and counselor. This approach enables both the equine and client to strive towards collaboration, compromise, and mutual understanding – all the ingredients of a healthy relationship. The interaction between the client and the equine helps the client gain the insight needed to meet mental health goals and identify strategies for effective relationships in life outside of the counseling session.

After completing his intake, George entered the pasture to meet the equines. Standing in the pasture and observing all of the equines, he was hit by a wave of anxiety. He didn’t know what to do or which equine he wanted to approach. His anxiety and indecision felt paralyzing. It was a familiar feeling, one he often experienced when a doctor asked him a question, a friend tried to schedule a dinner, or he entered a store to buy groceries. As he tried to focus on the peacefulness of the pasture, a tall black Thoroughbred gelding named Midnight, caught his attention from across the field. He said the horse looked strong and confident, qualities he felt he’d lost in himself. Almost as if on cue, Midnight abruptly stopped grazing and walked directly to George putting his nose in George’s hands. George spent the next ten minutes lost in petting Midnight’s velvety nose and feeling a sense of peace and tranquility wash over him. When the session ended, George stated that he had not felt that level of calmness in years.

As George’s sessions progressed with Midnight, he learned to use the horse’s behavioral cues to check in within himself both emotionally and physically. He began to make connections between feelings of anxiety and increases in his heartrate. As George became more self-aware, he began to connect specific thoughts and feelings. In Midnight’s calm steady presence, George felt safe enough to allow himself to recall traumatic memories and learn new ways to calm himself. He felt an increased sense of control and empowerment in learning to understand and take care of himself. He realized that his relationship with Midnight had turned on the “connecting part” of his brain and he began to reach out to friends he’d lost touch with to rekindle those relationships. As a result of his relationship with Midnight, George has found ways to manage his PTSD and has created a “new normal.”  Today, he has gone back to school to become nurse, has a close circle of friends, and has hope and excitement for his future ahead.