From Unwanted to Adopted – My Journey with Gem 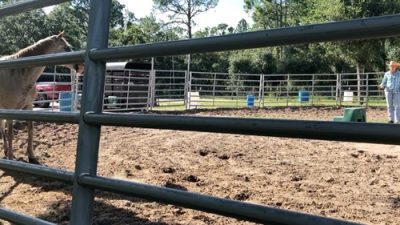 Nancy Slater had this to say about her experience working with Gem and why she supports the Parelli Foundation’s efforts: “Second hand gold is as good as new. Through their grants, the Parelli Foundation continues to help make the world a better place by spreading the wealth of knowledge. Gem and Carolyn are an example of hearts of horses and people coming together, hearts that otherwise might have been lost. An unwanted horse is simply misunderstood. It is my pleasure to be part of the team educating people to speak the language of the Horse, so all horses can end up in loving, forever homes.”

I’ve been with Sixteen Hands Horse Sanctuary in Ona, Florida, for a little more than three years, helping to care for 30-plus abused, abandoned and/or neglected horses, plus two adorable donkeys. When I first met Robin Cain, the sanctuary’s founder and president, she naturally asked why I wanted to volunteer there. I had read some books written by the founder of another horse sanctuary; I was appalled and saddened to learn how common it is for horses to be mistreated by humans, and yet I was intrigued and encouraged at how horses can heal physically, emotionally and spiritually, and how they can learn to trust people again. I was so moved by the author’s accounts of the many different horses she had rescued that I knew I had to find a place where I could become part of this amazing healing process. Robin told me about the sanctuary’s history, and she explained that she required all volunteers to learn and use Parelli Natural Horsemanship principles and techniques when handling the horses to stay safe around them. (Although I had heard of it, I wasn’t completely sure what Parelli was about. I was willing to

learn, though.) She also gave me some background information about the horses there, including some that were being cared for offsite by people taking part in the sanctuary’s Foster to Adopt program. I casually mentioned that at some point, I thought I’d like to consider fostering a horse or two – even though I wasn’t sure it would ever really happen. In the meantime, though, we agreed that I would begin volunteering at least one day every week, and Robin began teaching me about Parelli Natural Horsemanship. 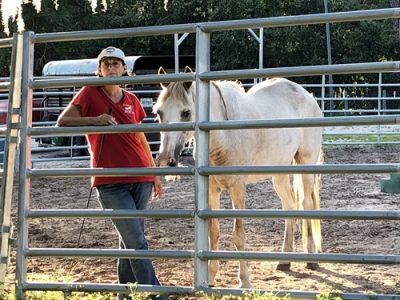 Gem and Carolyn – no pressure

In April of the following year, Robin asked me if I would consider fostering three new horses that had come to the sanctuary hundreds of pounds underweight. One was a gorgeous, bright-eyed blood bay Arabian named Cricket, whose curious and intelligent demeanor were immediately evident.

Lyric was the second Arabian, flea-bitten in color and the most severely underweight. She was much more reserved than Cricket, uncertain of her circumstances and the new humans attending her. She would hesitate, considering whether it was safe to accept any treats offered to her by volunteers.

And there was Gem. Gem was a beautiful strawberry roan gaited/quarter horse mix. She was not as underweight as the Arabians, and it soon became apparent why. Gem was extremely food motivated. The only thing she wanted from humans was food, and the only thing she wanted from other horses was for them to stay well out of her way when it was time to come to the barn for her food. Her personal space requirements were much larger than most of the other horses. Because we bring horses into the barn at liberty, her space was usually invaded by other horses, often at their own peril. Gem would pin her ears, scream, spin, and kick at any horse that got too close to her, sometimes making contact, and in one instance, actually knocking one large Andalusian completely off his feet.

Even though I had told Robin that I would foster these mares as soon as we got our pastures in shape, I really had my doubts about Gem. In fact, I had decided that I really, really did not want her. I had no idea what to do with her. I felt she was way beyond my level of natural horsemanship skill.

Then, late one Friday afternoon in July of that year, I watched as Robin began the process of loading Gem into her horse trailer. Gem was going to Nancy Slater’s in Lake Wales, Florida. Nancy, a 2* Parelli Natural Horsemanship Instructor, was going to begin working with Gem.

Robin invited me to come along, and I accepted the invitation. When we arrived in Lake Wales, Gem was unloaded into a round pen, and Nancy began working with her almost immediately, moving Gem’s feet around the pen, applying and releasing pressure at just the right time. I didn’t realize it at first, but she was teaching Gem that she could find release of pressure – rest and relaxation – when she focused on and approached Nancy, but not when she was running away. If she wanted to run, that was okay. Nancy would help her run. 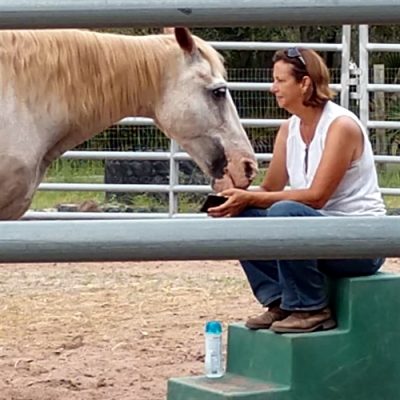 Eventually Gem began showing signs that she understood by lowering her head, blowing air out through her nostrils and yawning, and it wasn’t long before Nancy was able to touch her and put a halter and lead rope on her. I held back tears, taking in what I had witnessed. Nancy had begun peeling back the layers of this untrusting, very afraid, extremely unconfident horse, revealing a soul that very much wanted to trust and find peace with humans, and was willing to try. In that moment, I was the one who was changed. I fell head over heels in love with Gem, wanting so much to be able to learn how to communicate with her in her language. Over the next several days, Nancy began teaching me not only about staying safe with Gem, but she also began teaching me the skills I would need to help Gem feel safe with me. We accomplished quite a bit during that time.

When it was over, Gem came home to live with my family and me.

During these past two years, we’ve taken many baby steps, plus another trip to see Nancy for help. Gem has come a long way from the time I first met her at the sanctuary, when no one could touch her, or barely make eye contact with her. My Natural Horsemanship skills have also come a long way, including working with Gem at liberty.

Even though we are still getting to know each other, I know Gem and I are on the right track. Recently, Gem ran out of a pasture onto some neighboring property through a gate that was open while contractors were doing some working at our place. I went after her, calling to my husband, Scott, to bring a halter and lead rope. My heart was pounding. If Gem continued running west, she would go onto a street into the neighborhood behind us. Worse yet, if she switched direction and ran east, she could end up on a busy road where trucks, cars and semis often go well over the 55-mph speed limit. A collision would certainly kill her and potentially a person or persons. I called out to her, and eventually she stopped running, obviously confused by unknown surroundings. She was roughly 30 or 40 yards away from me, when she turned and looked at me. I began backing up, gently inviting her to come to me. She began walking in my direction, slowly and hesitantly at first. My mind raced. Would she speed up and run past me? Would she come up to me, only to take off again when she saw Scott with a halter? I concentrated on relaxing and smiling, continuing to invite her into my space. Slowly, surely, she came to me and stopped. I began stroking her neck on both sides, softly telling her what a good girl she was. 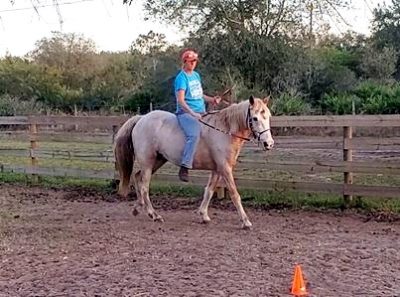 When Scott caught up to us with the halter, she let me put it around her neck, and then she put her nose into the nose band. I was able to lead her back to the safety of her pasture (gate closed). And then I realized even more how important, how vital, Natural Horsemanship is for people and their horses. In that situation, I was Gem’s safe place. Without Natural Horsemanship training, that event could have had a tragic ending. I’m so grateful to Robin Cain, Nancy Slater, the Parelli Foundation, and to all of the others who have provided encouragement and help in improving my Natural Horsemanship skills. Parelli Natural Horsemanship has changed my life and the life of not only Gem, but also Cricket and Lyric as well. I’m happy to say that I’ve recently adopted all three mares, and we’re having lots of fun learning to keep it natural!

Since 2007, Sixteen Hands Horse Sanctuary has provided a lifetime home for more than 70 rescued horses. Although we haven’t had an adoption program, we’ve allowed people well known to us to become fosters. Of our 40 horses and 2 donkeys, 10 horses are in foster care. However, horses with special physical and/or emotional needs will continue to receive lifetime care. We work hard to keep our horses healthy and content. It takes an 8-hour day and several volunteers to feed the horses, provide hay and fresh water, scoop barn stalls and pastures, groom and play with some of the horses.

Stay tuned for more stories from this grant opportunity.