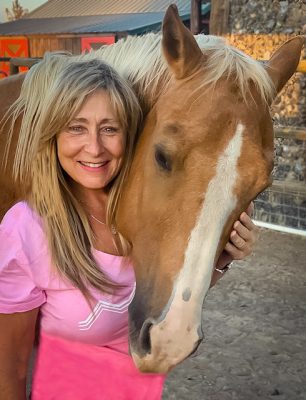 Robin Ryan is a retired International airline pilot for United Airlines. She is also a New Thought minister and NLP (Neuro Linguistic Programming) Practitioner and Coach. She has practiced natural horsemanship since 1998, when she attended a  performance where Pat and Linda Parelli teamed up with Olympians David and Karen O’Connor. She has been “hooked” ever since. Robin is passionate about being an eternal student of human nature, and of course, horse nature. She resonates with the natural aspects of life, such as practical spirituality without dogma, natural horsemanship. and being authentic while inviting all in her presence to do the same. Robin is currently serving as board president.

After 20+ years of building her career and raising a family, Elizabeth decided to return to her childhood passion of horses.  Like so many women her age, getting back into horses seemed easy….. until it wasn’t.  After purchasing her first horse, a high spirited fancy left brained extrovert,  Elizabeth soon realized that she needed help with training and riding this new horse.  A chance meeting with a local riding instructor soon led her to Parelli Natural Horsemanship.

By studying the program and attending lessons and clinics,  Elizabeth began to see a major difference in her horse and in herself and now she has been blessed to share life with her dream horse and partner, Rustler, an AQHA gelding she purchased from a Parelli ranch in Canada.

Elizabeth’s goal with the Parelli Foundation is to share her education and talents to fulfil the mission of  “ Helping create a better world for horses and humans through natural horsemanship education”.

Elizabeth holds a MBA in International Business and a BS in Economics/Finance from Southern Methodist University in Dallas and is currently the Corporate Controller for a construction company also located in Dallas. She lives in Denton Texas with her husband Brent, their three kids, three horses, three dogs and three birds. 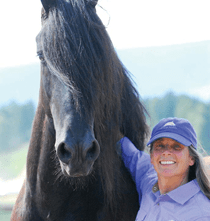 Kris is an experienced Parelli horseman,  riding directly with Pat Parelli and Linda Parelli since 1994.  She is a Parelli Professional 2* instructor who has achieved her Level 4 qualifications.  Kris has been breeding top Friesian horses for over 15 years, and is a retired international judge of the Royal Friesian Horse (KFPS), being known around the country and overseas. She also serves on the board of The Friends of the Ahnapee State Trail in Wisconsin, another 501c3 organization.

Her husband recently retired from running the largest label company in North America (and the second largest in the world!), is on the board of the Green Bay Packers, and is happy to consult with us. 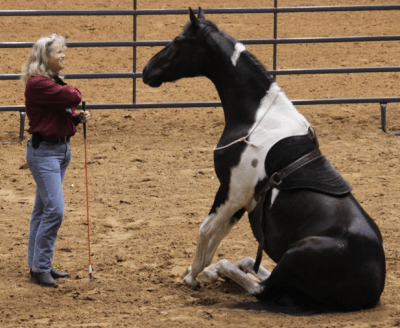 Ann started her journey with Parelli Natural Horsemanship in 1999. She became a Parelli Professional in 2003, and continued through the Professionals Program, obtaining her 3-Star certification. After years of teaching lessons, workshops, and clinics throughout the Pacific Northwest, she talked to Pat Parelli about working for him directly, and made the move to Colorado in 2009. During her time on the Colorado and Florida Campuses, Ann held different roles, including Campus Administration Manager, Professionals Program Director, Campus Manager, and Pat and Linda Parelli’s Personal Assistant (and Pat and Linda’s dog nanny!), while her husband held positions as Ranch Hand and Facilities Manager. Ann was involved in some of the early discussions as the Parelli Foundation started to take shape, and upon the approval of the 501-c-3 status, Pat asked Ann to join the Foundation, to help carry his vision forward, and to continue to run the Campus courses, which were transitioning to be under the Foundations jurisdiction.

Ann worked as an employee of the Parelli Foundation until December of 2017, when she pursued a new career path as a FileMaker software developer. She currently works remotely for SeedCode, where she continues to carry all the lessons that she learned during her time in Parelli into the tech world. Ann is excited to stay connected with her Parelli community through her role on the Parelli Foundation Board, and offers valuable historical knowledge of both Parelli and the Parelli Foundation. Ann lives in Lebanon, Oregon, with her husband Jim, and their 5 horses, 4 dogs, 2 cats, and 16 chickens. 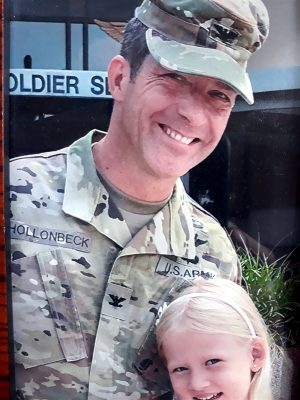 COL Sean Hollonbeck was born at Fort Benning Georgia the second identical twin son of an Army Optometrist serving there in 1969.  He was raised in Northern Illinois attending all primary and secondary school there excelling in academics and several athletic events.  Due to a traumatic event resulting in a spinal cord injury to his twin before the start of high school COL Hollonbeck set his path to become a physician and serve his country.  He had an early calling to serve and his junior year of high school at 17 he joined the Illinois Army National Guard as an 11Bravo light infantryman. His parents met at 4H and in his youth his family trained and raced standardbred horses.

He completed his undergraduate degree from the University of Illinois majoring in Biology. He was accepted early entrance to Southern Illinois University School of Medicine and proceed to Fort Benning GA were he completed his Residency in Family Medicine at Martin Army Hospital in 2000.  His medical education continued with a second residency in the joint Army Navy Aerospace Medicine at Naval Air Station Pensacola in 2007. He also obtained a Masters of Public Health from the University Of Texas Medical Branch as part of that program while having the honor of educational training at NASA.

COL Hollonbeck military assignments range from 11B infantry basic and advanced individual training in 1988  in the National Guard and later as a forward support medical officer in 1996. He then accepted anHPSP scholarship and transitioned to active service for his residency and after selection began his first operational active duty assignment with the 160th Special Operations Aviation Regiment Airborne from 2000-2003 serving extensively in OIF and OEF.  He then led and served as a clinic chief at Fort McPherson GA. After that he attended aerospace medicine residency training and API flight training with the Navy at NAS Pensacola. Then he proceeded to Fort Hood TX with the 3rd  ACR, Armored Cavalry Regiment, deploying to OIF again during the surge and was a Task Force Surgeon for TF12 providing brigade aviation support to the surge in Baghdad and CASEVAC/MEDEVAC support from Baghdad to Basra.  After that he was selected for Command and General Staff College (CGSC) in residence in 2009 to 2010, completing a second Masters in Military Science. Then he served back to back executive health care leadership tours as the DCCS at Fort Leavenworth 2010-2011 and then Fort Rucker 2011-2013. From there COL Hollonbeck volunteered to serve with 3rd BN 7th Special Forces at Eglin AFB FL 2015-2015 and deployed again to OEF.  He returned to Fort Rucker and served as the Auditory Protection and Performance Division Chief and was selected to direct the Congressionally

Directed Military Research program (CDMRP) JPC-5 Working Group Chair for Hearing Loss from 2015-2017. His final assignment was as the Deputy Commander of the US Army Aeromedical Research Laboratory at Fort Rucker AL in 2018.  He retired in the summer of 2018 to Gulf Breeze FL with his 8 yo daughter Olivia and their various horses, cows, goats and chickens. He worked for the last year conducting contracted VA disability ratings exams and legal consulting work for blast injury and hearing loss for veterans.

COL Hollonbeck’s awards, honors and certifications include the two bronze stars, two air medals,  parachutist badge, senior flight surgeon wings, naval flight surgeon wings, the order of St. Michael, the German Armed Forces Proficiency Badge, SERE C training, over 30 awards and medals. His career spans decades of difficult and hazardous assignments from special operations task forces to large healthcare management. He spent his career on active flight status and has additional skill identifiers are 60A Hospital Management,  3H Joint Planner, 3Y Space Enabler, 5P Parachutist, and 8X Acquisition. He is a proud veteran, dad and growing horseman. He also is an avid outdoorsman, sportsman, a voracious reader and lover of animals and nature. Locally he is volunteering with veteran’s service organizations and the IHMC. He serves on three boards, the Pensacola Veteran’s Memorial Park Board, the Parelli Foundation Board, and the SIU School of Medicine Alumni Board.  During the second half of his career Dr. Hollonbeck worked more and more in the area of PTSD and has in retirement established a local veteran PTSD equine therapy non-profit program to help veterans move past their traumatic exposures. 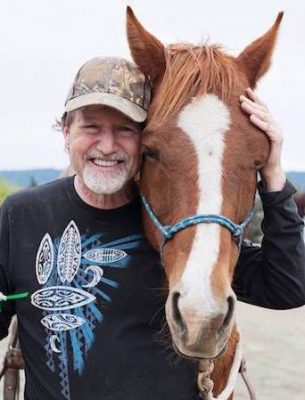 Andrew is a native of the San Francisco Bay Area where he is a Management Consultant, Journalist, and Equine Advocate. Andrew’s mission, “For the Horse, the People that Love them, and Wellness for both” is closely aligned with the Parelli Foundation’s mission: “Helping create a better world for horses and humans through natural horsemanship education.”

Andrew began his study of Natural Horsemanship in June 2000 immediately after witnessing the amazing Parelli Savvy Team at Western States Horse Expo, and he continues to enjoy being a Student Always of horsemanship that is based upon forming a positive and progressive relationship with the horse.

Andrew currently serves as President of Bay Area Savvy Players – a Natural Horsemanship Club which began in 1999 and is now a member club of the California State Horsemen’s Association (CSHA).  Andrew is also the Host of the IHA Live! for the International Horsemanship Association which welcomes horse enthusiasts everywhere via Zoom to enjoy interviews with highly skilled and influential horse professionals and practitioners.

Andrew has served as Central Area Vice President, Corporate Officer, and Member of the Board of Directors for CSHA (501c3). He currently serves as Secretary for the Sunol Business Guild (501c3), a regional philanthropic organization.

Andrew brings to the Parelli Foundation his experience in Strategic Planning and Leadership Consulting, high tech and complex product development Program Management, as well as Sales and Marketing savvy. Andrew earned his MBA from the Haas School of Business at the University of California Berkeley and his BS degree in Computer Science from California State University.

Andrew and his wife René are both long time students of Parelli Natural Horsemanship and live in the East San Francisco Bay Area’s unincorporated rural area of Sunol, CA along with family and their four talented horses. Andrew is pleased to bring his business acumen and passion for Natural Horsemanship to the Parelli Foundation Board of Directors. 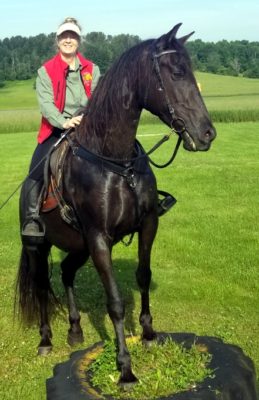 Lori Northrup is passionate about how the Parelli teachings and philosophy can make the lives of horses, and the humans around them, so much better.  She is proud to have started the Parelli Foundation in 2012, with the incredible support of Pat and Linda Parelli, board members, key volunteers and amazing donors.  She served as President of the Parelli Foundation Board from 2012 – 2016 and is proud to be a 3-Star Parelli Instructor.

She also served for 10 years as President and Board member of Friends of Sound Horses (FOSH), working to encourage positive, humane education for gaited horses, and the effort to end the soring abuses practiced on Tennessee Walking Horses for the show world.  Her leadership including growing the organization through raising significant donations, organizing annual Sound Horse Conferences, working with pro-bono law firms (including the 5th largest law firm in USA, and firm winning 2008 Pro Bono Firm of the Year in Washington DC), and regularly meeting and communicating with Senators, Congressmen, reporters, and government enforcement. She led an all-volunteer board of 20 from USA & Canada.

In 2017, she won New York State’s “Horseman of the Year” Award, and the CCABLAC “Lifetime Achievement Award.”